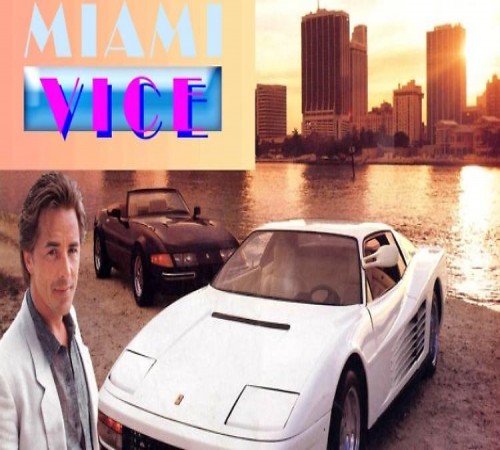 Slickest Cars from the Eighties

How much do you miss the macho cops and cool cats from Eighties television? I am talking about timeless shows, like Miami Vice and Knight Rider, as well as Magnum P.I., The Dukes of Hazzard, and The A-Team. What do all these prime time shows have in common? Each one features a timeless automobile that became iconic for the generation.

The king of Eighties TV is Miami Vice. On the air from 1984 to 1990, the groundbreaking series set clothing trends, featured a hip soundtrack and paved the way for numerous future cop dramas. Miami Vice also stands as the first US network tv program that was broadcast in stereophonic sound. The leading man, narcotics agent Sonny Crockett drove stunning Ferraris. First he had a black Daytona Spyder 365 GTS/4, followed by a white 1986 Testarossa. His partner, Ricardo Tubbs, cruised around South Florida in a 1964 Cadillac Coupe deVille Convertible. Spectators could expect plenty of chases with exotic cars, such as various Lamborghinis, a gorgeous black 1978 Porsche 911 SC, and an eye-catching Ford GTO.

Decades before Siri and Alexa, a customized 1982 Firebird featured artificial intelligence that spoke to the driver. Now imagine if your sleek ride was also smart enough to drive on its own. It could save the day, along with create funny one-liners every week. On the air from 1982 to 1986, Knight Rider starred KITT (Knight Industries Two Thousand), an almost indestructible muscle car. The black Pontiac Firebird Trans Am had a scanner bar with a red light mounted on the hood. Then there was a powerful Turbo Boost for jumping over tall obstacles. Played by Baywatch’s David Hasselhoff, protagonist Michael Knight and KITT made a tremendous team fighting crime in the Eighties.

If David Hasselhoff wasn’t macho enough, you could always rely on Magnum P.I. to save the day. From 1980 to 1988, Tom Selleck was the coolest private detective in a Detroit Tigers baseball cap, “Junglebird” Hawaiian shirt, and shorts. Magnum and his thick mustache raced throughout the tropical streets of Oahu in a red Ferrari 308 GTS Quattrovalvole. The series also featured other phenomenal automobiles, such as a 1985 Audi 5000 Type 44, a 1969 Jaguar E-Type, a convertible Mercedes-Benz R107, and other ravishing Ferraris. No matter how viewers feel about the 2018 series remake with Jay Hernandez as the protagonist, there is no denying the show’s Ferrari 488 Spider’s beauty and precision.

On the opposite spectrum, The Dukes of Hazzard was a comedic show in the fictional Hazzard County, Georgia. On the air from 1979 to 1985, the series was based on the movie Moonrunners. It stared two young cousins as Bo and Luke Duke, as well as their 1969 Dodge Charger. The familiar muscle car is easily recognized by the Confederate flag on the roof and the number 1 on each door. These doors were also welded shut, as it was originally built to be a racecar. Using both 1968 and ’69 models to film, the Chargers are now famous for performing record breaking stunts while filming, along with being destroyed onset. TV viewers also got glimpses at many other notable cars, including a blue 1975 AMC Matador and a white 1970 Cadillac Coupe deVille convertible. Then there was the Dukes’ cousin Daisy. Her tiny jean shorts are the result of the familiar term “Daisy Dukes.”

Finally, there is The A-Team. Looking for fun thrills, audiences soaked up the adventurous tales of a fictitious United States Army Special Forces unit retirees. Besides Mr. T’s famous mohawk, The A-Team was known for its 1983 black and metallic gray GMC G-Series Vandura van. It also had the familiar red stripe that viewers at home learned to appreciate. To top it off, there was a spoiler on the roof. The van would jump over other cars and break through walls without getting so much as a scratch. On top of 8 cylinders, it sported 15" American Racing 14 Spoke wheels. Watch closely and you’ll notice the sunroof, GMC logos on the front grille and doors mysteriously disappear in all stunts. Doh! Regardless, The A-Team became a pacesetter in cars, as a few automobiles, like the Bedford CF and Chevy Vandura, were modeled after the familiar van.

No matter what piece of equipment you park in your driveway, make sure you get ultimate driving experience with high-quality car insurance. To learn more, visit Insurance Line One or call (800) 606-1671. Whether you are trekking down the highway with the top off or watching Eighties television classics in the back of mom’s minivan, the ride is much sweeter when you and your loved ones are secure with high-quality insurance. #autoinsurance #carinsurance

Servicing of consumers who were being denied by the major Insurance carriers due to preexisting medical conditions.

Is Your Businesses Required to Have Liability Insurance? Important Considerations

How Critical Illness Insurance Works: Financial Relief When You Need It Most

California Tax Penalty for No Health Insurance: You’re Not Off the Hook